My oldest kiddo celebrated his 6th birthday last month (sniff sniff)! Man he's growing up fast! Jonathan loves Mario and Sonic, so we decided the theme would be Mario and Sonic at the Water Olympics.
When the kids first arrived, they got to choose whether they were going to be team Mario or team Sonic by picking a hat. 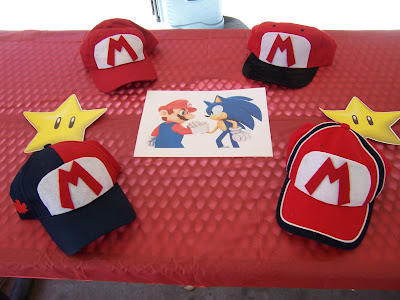 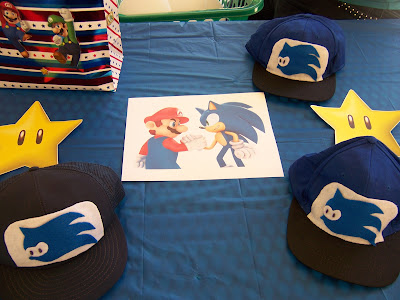 I shared how I made the hats HERE

Next came the games. I initially thought we would have Team Sonic compete against Team Mario. But a couple of the boys weren't able to come, so we had more kids on Team Sonic. We just divided them into two teams, and they all still had fun.
Our first game was the Mario vs Sonic Relay Race. I just got a couple of containers, filled them with water, and then had the kids race to fill the smaller container with water by using a shovel. It was a really simple game, but the kids had fun. 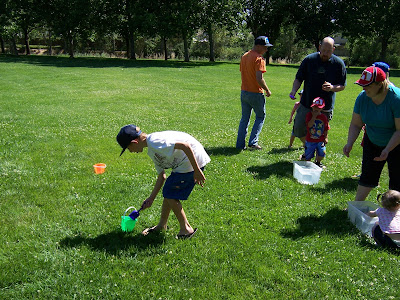 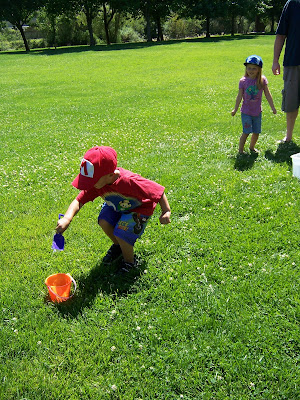 For the next game we did an obstacle course. They started out by spinning around a bat 5 times, just to get them dizzy! 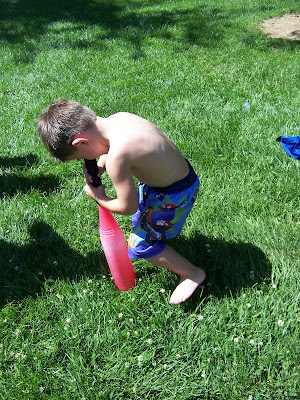 Then they had to climb through a tunnel, which proved to be almost impossible for the older boys! 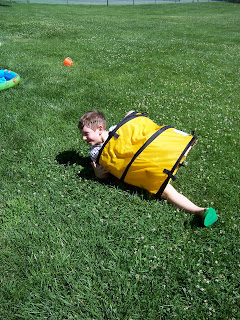 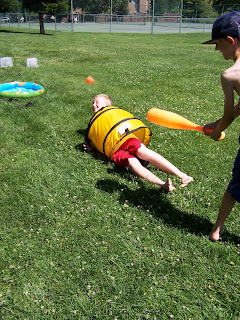 Then they had to sit in a pool of water 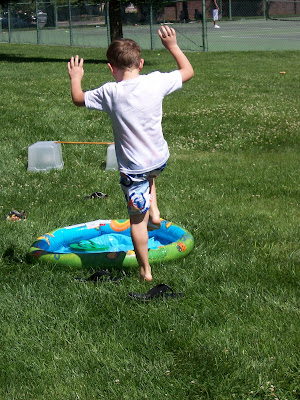 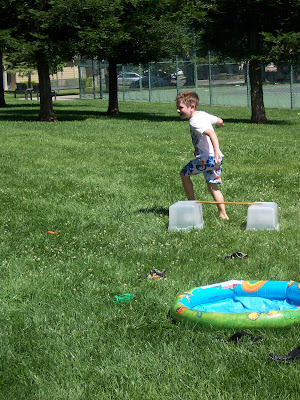 Last they had to do a hurdle over a stick. I wish I could have found something different for them to jump over, but this was what I had! And the kids don't care if it looks goofy!

Next we played Get the Goomba 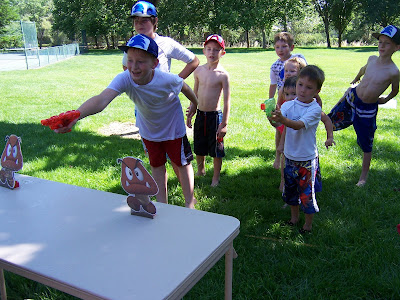 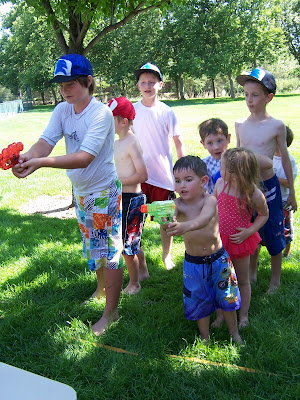 This game was fun, but was ruined by the crummy water guns I bought. They were only $1 at Walmart, and I thought I scored! Then we went to use them, and they didn't really even work. So this game was short-lived, but it could have been really fun.

For the last game we did a Yoshi Egg Toss. I got white balloons, and Jacki colored green spots on them so they looked like Yoshi eggs. Of course I didn't get a picture of the egg balloons, but you get the idea! I would also recommend you get water balloons for this. I couldn't find any white water balloons, so I used regular balloons, and they wouldn't pop! 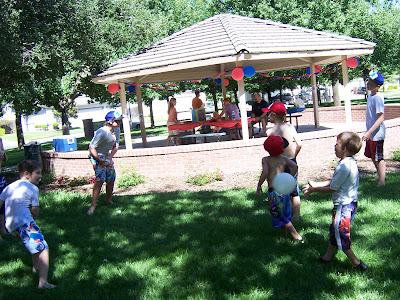 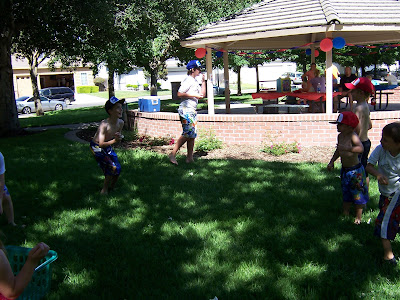 After the games, we had cupcakes and ice cream cups 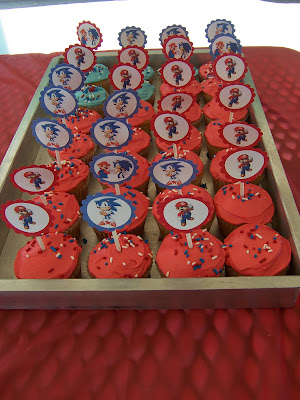 I just printed the Mario and Sonic pictures onto cardstock, and then Jacki punched them out with a circle punch, and did a coordinating scallop punch to back it. I love how these turned out, and they were so much easier than making a cake and having to bring plates and utensils. I also didn't want to make a cake because last year I made this cake for Jonathan for his 5th birthday 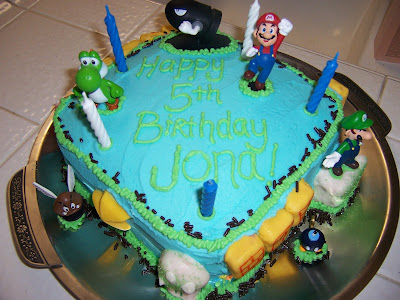 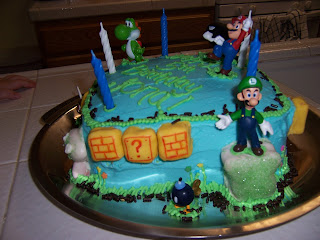 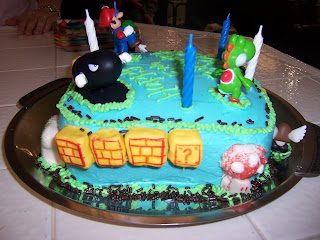 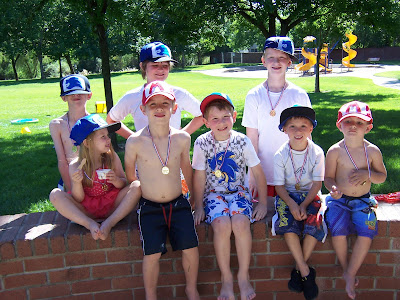 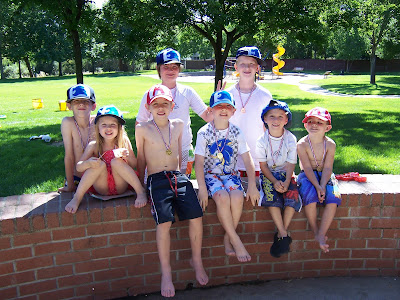 We ended the party by awarding each of the kids with a gold medal and a bag of treats. Again, I don't have a picture of the goody bags, but I just bought red and blue goody bags from Walmart, and stuffed them with junk. I found Mario Kart memo pads and stickers at Party city, and I bought Mario Kart fruit snacks from the grocery store. The rest of the goodies were just generic water party gifts like water bombs, mini water guns, and more treats. This party ended up being so fun, even though quite a few of the kids weren't able to come. Now I'm just hoping my son likes something other than Mario or Sonic next year!

Thanks for reading!!
Juli

Linking to THESE fabulous parties!
Posted by Juli
Email ThisBlogThis!Share to TwitterShare to FacebookShare to Pinterest
Labels: Birthdays, Parties

This is so cute! I played a lot of sonic growing up, so I would choose that side! It looks like so cute!
I have a fun rosette headband giveaway going on this week--you should come and enter! http://hannahjholmes.blogspot.com/2011/08/giveaway-enter-to-win-handcrafted.html

Hi. I am a new follower. Love this post! Stopping by to invite you to join Thrifty Thursday, because your I am loving your posts. Have a wonderful day. Blessings!

Hi, I do believe this is a great blog. I stumbledupon it
;) I will return yet again since I book-marked it.
Money and freedom is the best way to change, may you be rich and continue to guide
others.

Here is my web-site - acoustic guitar a chord

This is quite an interesting share from Mario vs Sonic Birthday Party! My son is turning 7 in next month and he loves such fun themed parties. He just asked me to host a custom Star wars themed birthday party for the celebrations so I am thinking to reserve the garden event venues in Bay area for this bash.