Hello again, I am about to put Epic Fail on this post just like Juli, but I will refrain.  I didn't love it but oh well I think the boys liked it.

I wanted to do something fun and easy for my boys, since it snowed here and they couldn't go play outside.  I remembered the simple craft of crayon shavings and wax paper, so we got out our stuff and here it is. 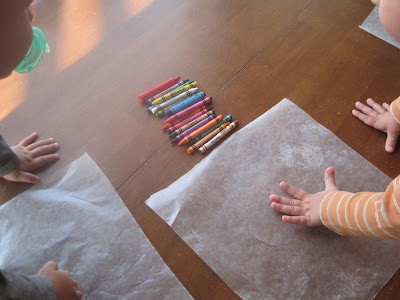 Start with a sheet of wax paper and some crayons. 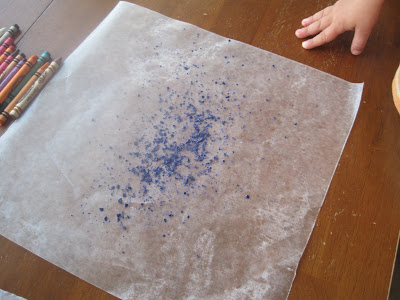 I then shaved the crayons in the colors that they wanted on their sheets of wax paper. 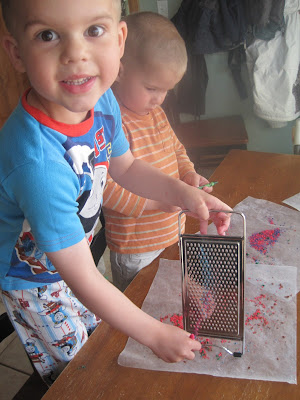 I let them shave some on the cheese grater too. 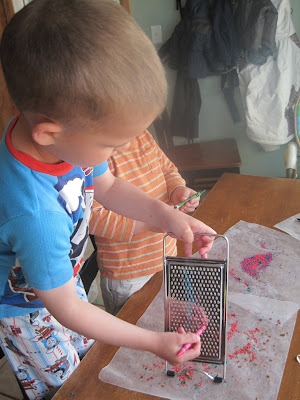 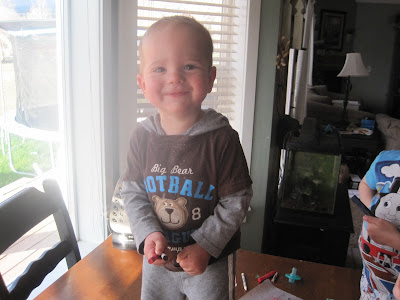 Even my one yr old was having a blast, just playing on the table. 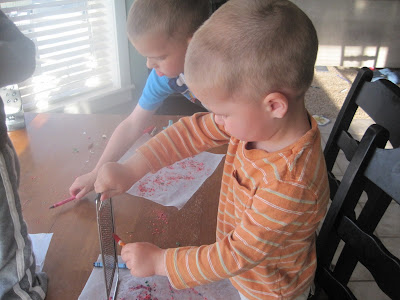 I was having a hard time wondering how this was fun for them since I was the one shaving, but they had fun designing the shavings and spreading them around. 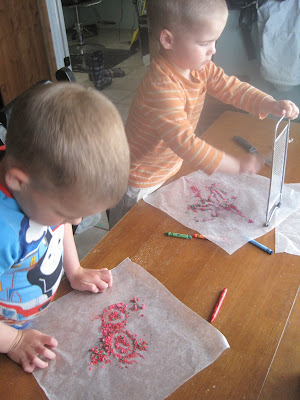 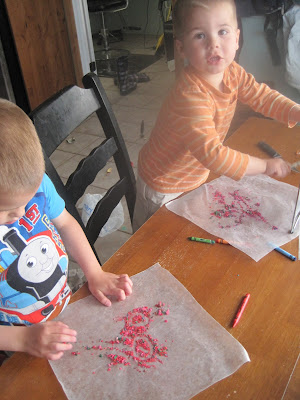 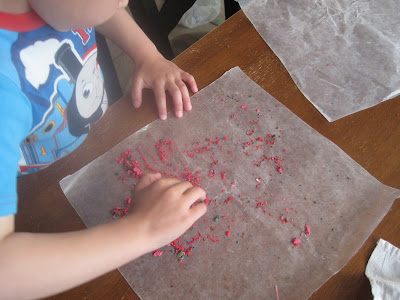 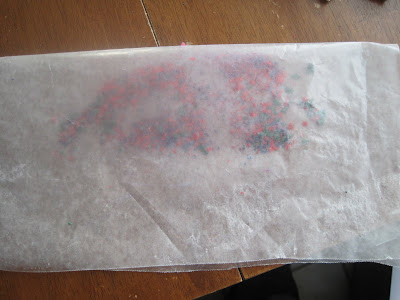 Then you fold the wax paper in half and iron.  Make sure there is a towel in between the iron and the wax paper, because it totally seeps through. 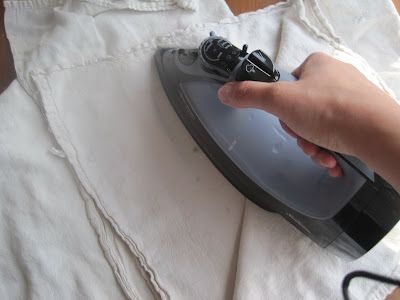 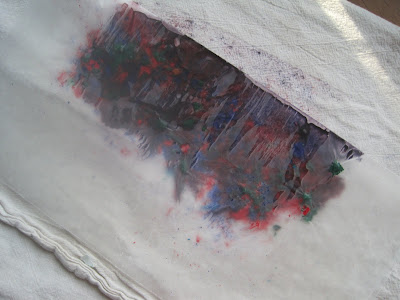 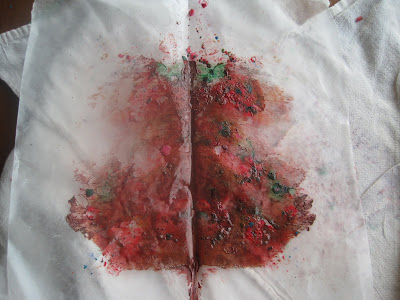 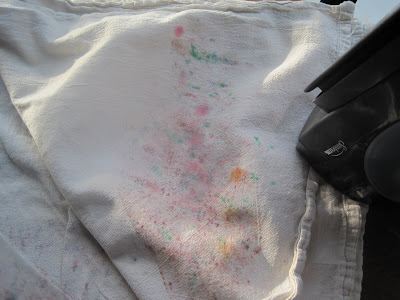 WARNING:  It does stain the towel, so use one you don't like. 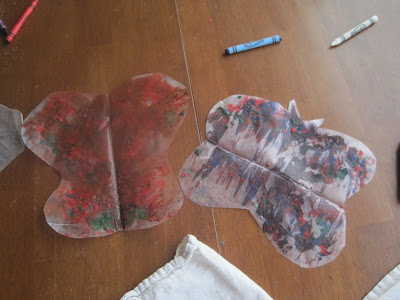 So with some creative cutting you can get them to look half way decent.
I wanted to try using bigger chunks to see if maybe that would make them look any better, so I did my own. 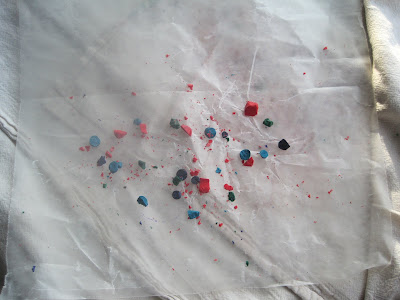 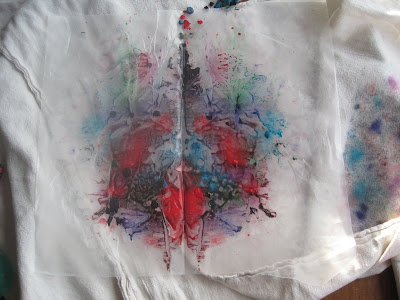 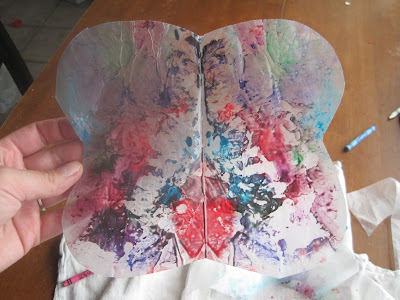 Be warned that ironing them twice doesn't work that well.  I had some spots not completely melted and then it made some wax in other spots stick to one side and not the other anymore, so make sure it is all the way melted the first time. 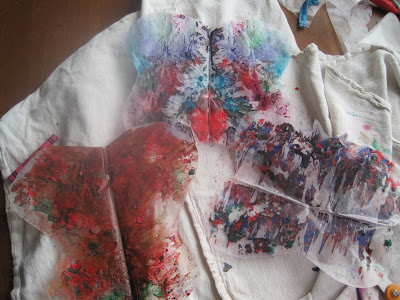 They do look better in the window.  But over all not as magical as I remembered as a child.  But it is for the kids, so oh well.

I also found this post from Martha Stewart after I was done and thought oh man she can make even a kids craft look AMAZING!  If only!
Well I hope that even though they are hideous that it will give you an idea for a fun time with the kids, and bring back some great memories from your childhood.
Posted by Jessica
Email ThisBlogThis!Share to TwitterShare to FacebookShare to Pinterest

Finally, some pics of your boys. They are too cute! I remember doing this when I was little too. It was super fun to do back then.

I have to thank you for the efforts you have
put in penning this site.

I'm hoping to check out the same high-grade content by you in the future as well. In truth, your creative writing abilities has inspired me to get my own, personal website now ;)

I'm amazed, I have to admit. Rarely do I encounter a blog that's both
equally educative and engaging, and without a doubt, you have hit the nail
on the head. The problem is something which too few people are speaking intelligently about.
I'm very happy I found this in my search for something relating to this.

Pretty nice post. I just stumbled upon your weblog and wanted to mention that I have really loved surfing around your weblog posts.
After all I will be subscribing for your rss feed and I hope you
write once more soon!

I don't even understand how I finished up right here, but I assumed this post was great. I don't realize who you might be but definitely you are going to a famous blogger if you happen to are not already.
Cheers!

Hello friends, fastidious article and fastidious urging
commented at this place, I am genuinely enjoying by these.


Feel free to surf to my site - click here

I was recommended this web site by my cousin. I am not sure whether
this post is written by him as no one else know such detailed about my problem.
You're amazing! Thanks!

I feel that is one of the most vital info for me.
And i'm glad studying your article. But want to statement on some normal issues, The website style is perfect, the articles is in point of fact nice : D. Good activity, cheers

Excellent weblog here! Additionally your site rather a lot up fast!
What host are you the use of? Can I am getting your affiliate link for your
host? I desire my site loaded up as fast as yours lol

Take a look at my web page ... click Here

I visited several sites except the audio quality for audio songs
current at this website is actually superb.

Hi to every body, it's my first go to see of this weblog; this blog contains amazing and genuinely good data for visitors.

Hello there, just became aware of your blog through Google,
and found that it is really informative. I'm going to watch out for brussels. I'll be grateful
if you continue this in future. Many people will be benefited from your writing.

Greetings from Carolina! I'm bored at work so I decided to browse your blog on my iphone during lunch break. I love the information you provide here and can't wait
to take a look when I get home. I'm shocked at how quick your blog loaded on my mobile .. I'm not even using
WIFI, just 3G .. Anyways, wonderful site!

This is very interesting, You are a very skilled blogger.
I have joined your rss feed and look forward to seeking more of your excellent post.
Also, I've shared your website in my social networks!

Hey! Someone in my Myspace group shared this website with us so I came to take a look.
I'm definitely loving the information. I'm bookmarking
and will be tweeting this to my followers! Great blog and superb design and
style.

Hey there! I know this is kinda off topic but I was wondering which blog platform are you using for this site?
I'm getting tired of Wordpress because I've had
problems with hackers and I'm looking at options for another platform. I would be fantastic if you could point me in the direction of a good platform.

I rarely leave comments, but after browsing a few of the responses here "Wax Paper and Crayon Butterflies!!!".
I do have a couple of questions for you if it's allright. Is it just me or does it look like some of these responses come across like they are coming from brain dead individuals? :-P And, if you are posting on other sites, I'd like
to follow anything new you have to post. Would you list of every one of all your shared pages like your Facebook page, twitter
feed, or linkedin profile?

Hi there, after reading this awesome piece of writing i am also happy to share my know-how here with colleagues.

I am regular visitor, how are you everybody? This piece of writing posted at this website is in fact nice.

Very soon this web site will be famous among all blogging
and site-building visitors, due to it's pleasant articles

Feel free to surf to my web-site ... luxury villas in marrakech

I love your blog.. very nice colors & theme.
Did you make this website yourself or did you hire someone to do
it for you? Plz answer back as I'm looking to create my own blog and would like to know where u got this from. many thanks

Today, while I was at work, my cousin stole my iphone
and tested to see if it can survive a 25 foot
drop, just so she can be a youtube sensation.
My apple ipad is now destroyed and she has 83 views.
I know this is completely off topic but I had to share it with someone!

Oh my goodness! Amazing article dude! Thanks, However I am experiencing problems with your RSS.

I don't know why I can't join it. Is there anybody having the same RSS problems?
Anyone that knows the answer can you kindly respond?
Thanks!!

It's actually a great and useful piece of info. I am happy that you shared this useful info with us. Please keep us up to date like this. Thanks for sharing.

Currently it looks like Movable Type is the best blogging platform available right now.
(from what I've read) Is that what you're using on your blog?

I am extremely impressed with your writing skills and also with the layout on your weblog.
Is this a paid theme or did you customize it yourself?

Anyway keep up the excellent quality writing, it's rare to see a nice blog like this one today.

Hello! I know this is kinda off topic however
, I'd figured I'd ask. Would you be interested in trading links or maybe guest authoring a blog post
or vice-versa? My site goes over a lot of the same topics as
yours and I think we could greatly benefit from each other.
If you are interested feel free to send me an e-mail.
I look forward to hearing from you! Great blog by the way!

Whats up very nice web site!! Guy .. Beautiful .
. Superb .. I will bookmark your website and
take the feeds also? I am happy to seek out
numerous useful info here in the publish, we want work out more strategies on this regard, thanks for sharing.
. . . . .

Here is my webpage; specialised cakes

It's not my first time to pay a quick visit this web site, i am visiting this website dailly and get pleasant facts from here everyday.

I pay a visit everyday some web sites and blogs to read articles, however this webpage gives quality based articles.

Good way of explaining, and pleasant article to take
information concerning my presentation focus, which i am going to present in
academy.