Hi! Mother Hen is FINALLY back!!
I have spent the last three weeks in Nevada and California
doing our Texas Twister Drinks!
While I was there, I got to spend lots of time with


Jacki and Juli and my cute grand-kids and son-in-laws!
Thanks Jacki and Juli for a wonderful time!
(I have just lost my whole post. I shouldn't have played with it.)
Hope I can remember what I wrote!?! Arg!
I hope at some point and time, I can write a post JUST ONCE!!!!

On Tuesday, while I was there, Jacki asked me if I would
teach her 'Young Women' class how to make bread.
Every time my kids come home, there are always some things they want to eat.
BREAD is one of those things! 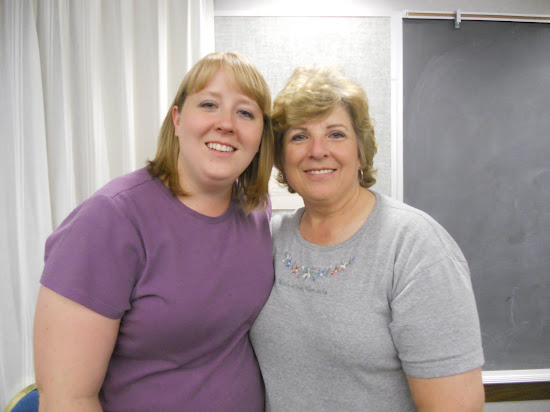 Here I am with Jacki on Bread Making Day!

It brought back so many memories!
I learned how to make bread in 1973 when I was pregnant with
my oldest daughter (JaNae).
I used to get together with a great friend: Kathie Hunter,
when we both were young married ladies!
We both wanted to make bread, but I hated to get my
hands all sticky with dough, and she hated to get
her hands all dry and floury. So.......
I put the ingredients together, she mixed the dough with
her hands, and I made the loaves and rolls.
It was a GREAT system!
Then after it was done, we would split the goodies.
We did that for a long time and then I got a Bosch Bread Mixer!!!
After all those years I had forgotten how much I hated
getting my hands sticky. It only took mixing up a batch
with the Young Women to REMEMBER! Yuck! Thank Heavens one of the
leaders jumped right in - - -up to her elbows (and all
down her front) and used her hands to mix the dough
while I helped the girls get theirs going.
(Love you Karey!!)

The girls did an awesome job and I think they had fun doing it.
They each made a loaf and some rolls.
Earlier in the day, Jacki made a batch of bread,
I made a large batch and the girls each made a small batch.
That way they could each eat some but have some to take home too!

We had to use both ovens in the church and then put
the last pan in after the first two ovens were done.

When the bread was just about done and smelling very yummy, all of a sudden the kitchen was full of Scouts, leaders, other classes of girls and anyone else
that was in the building!

We had enough bread that everyone that came in got at least one piece
(and often the boys had more - - of course)
and the girls still got to take a loaf and some rolls home. 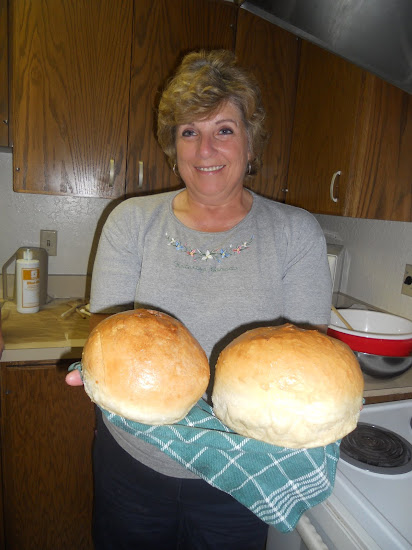 Here are a couple of the loaves I made.
There absolutely is nothing like warm bread and butter!
(Peanut butter makes it even better)
I always make the large batch, put them into 4 or 6 round loaves, or make them into rolls.

Here is the recipe for the bread. Both size batches are on the card.
Jacki did an awesome job of making cute cards for everyone. 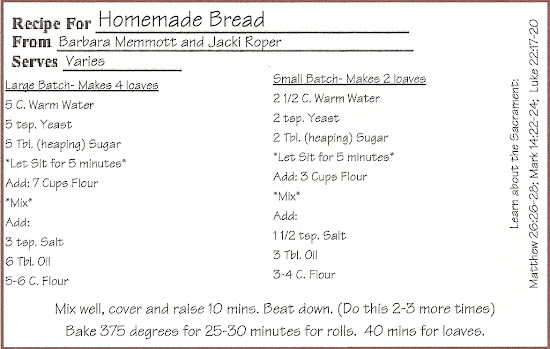 Now some thoughts on making bread:
If you are in a hurry (which I always am), after I have mixed the dough, I make it into the loaves, and having preheated the oven, pop them right in to bake.
I don't know if it makes any difference, or what difference it does make,
but it gets done fast and I've never had a complaint on the taste or texture.
Keep an eye on the bread. You'll get so you can smell when it's done, but a lot of things affect how long it takes to cook. Summers in CA are very humid, while summers in UT are very dry! Some days it may take longer than others. If the top is getting brown before
the bread is done, put a piece of aluminum foil over the top with the shiny side up.
That will deflect the heat so your tops won't burn. Make sure you put your pan in the middle of the oven length wise and width wise so all sides get equal heat.
You can also experiment and make cinnamon rolls with the dough. Roll it out, spread butter all over it, sprinkle on cinnamon and sugar and roll up. To cut them you can either use a knife, or put a piece of thread around the roll, cross it and pull and you will cut right through the dough. The kids always loved it when I stretched out small pieces and made scones. Just fry them in a little bit of oil an add what ever toppings you'd like!

Hope you all run in and make a batch of bread. It is truly delectable!!
Your husbands or boyfriends, parents or friends will really be impressed.
As you are reading this, I am on a 14 day cruise to ALASKA!!
It will be interesting to see what I come up with for next week.
Have a great weekend! Thanks so much for reading!!
Mother Hen - Barbara
Posted by Barbara M.
Email ThisBlogThis!Share to TwitterShare to FacebookShare to Pinterest
Labels: Recipes

Bella @ Bella before and after said...

This is so cute, I just love it. I have so many memories with my mom, and I am so lucky she STILL brings me bread all the time, he he.

You should totally link this up girl !!!

Bella :)**AMAZE ME AUGUST** @ Bella Before and After